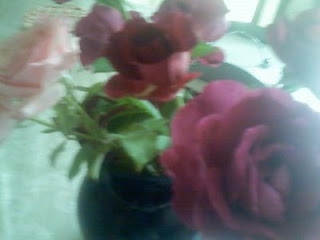 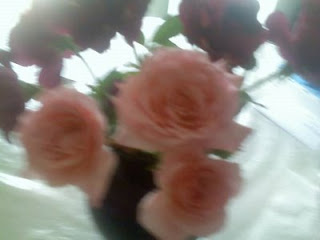 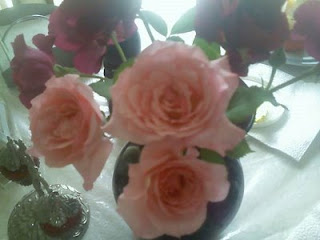 So what are three cell phone photos of the same bouquet of flowers doing on a post about rewriting? Can you tell which one was taken first, second, last? (Hint, they're not in order.)

This post came about when several people on a listserve from the Donald Maass workshops mentioned about their fears/concerns about rewriting after attending a workshop. The main fear? "I thought I was the only one completely rewriting my w.i.p.!"

Why this fear? Why not be afraid that you'll never finish? And if you do it'll never be published? Aren't these bigger fears? Look to the photos for my answer. Which one was taken first? The best of the bunch, the three shot that's in focus and has the interest of the unusual salt-and-pepper shakers in the shot.

Therein lies the big rub--what if the first version is the best of the bunch? Has the most energy? That can happen--and as I said in previous posts, endless re-writing can destroy a w.i.p. How to know? How much is too much? How little is too little?

Perhaps a better question would be: should I only have taken the one photo? No. I had no way of knowing which photo would be the best of the bunch. Sometimes I even prefer the out-of-focus photos. You never know what you're going to get and what will succeed until you try several things.

Taking this idea over to drafts, do more than one and keep all of them. Go back when you have a tiny semblance of objectivity and see which one is better. Trust that your writing will improve with more writing. Trust the inner voice that says, "Enough."

Does this resonate with you? Do you limit your drafts or go by instinct to know when you're "done"? How about if you've attended a workshop, do you doubt or feel more confident?

Posted by Conda Douglas at 1:05 PM

Email ThisBlogThis!Share to TwitterShare to FacebookShare to Pinterest
Labels: Conferences, Creativity, Dream On, Editing, Happiness, How to Focus and Succeed, Maass Intensive, Writing

This is a great post, and I love the way you used the shots of the flowers to illustrate your point.

I have always re-written to the point of lunacy. I read aloud to myself. I substitute words. I cut many of my favorite sentences. I work and work and work until I think I'm finished. Even then, I might re-write it again before I file it away. Two months later, I might change it again. It's a never ending process. Then, after I send something to a publisher, I agonize over something I should have written differently. To me, it's all part of writing, and striving to improve my work. So, I think your point point is well made: Don't settle for the first draft - that is unless your name happens to be Abe Lincoln!

Thanks, Swu for your kind comments. And I believe you are the norm for most writers--rewrite and rewrite until you get it right!

Yes, bad pun. But I liked it.
I know my writing improves over several drafts, but I'm not sure when to quit. It helps if I have a purpose for the draft...eliminate a page a chapter (so I'm focused on eliminating deadwood)...root out tired cliches, and so on. If I try to do them all in one draft, I flounder.

That's a good point, Kathy--if you have a goal with each draft that's specific and a list of goals and when you've gone thru the list, you're done--hmmm, that might stop endless rewriting!

If your blog is any example, you do an amazing amount, Muse--of every creative endeavor you do!

And yes, those are the grapes hanging on a vine--adorable and fun.

And a great weekend right back at you!