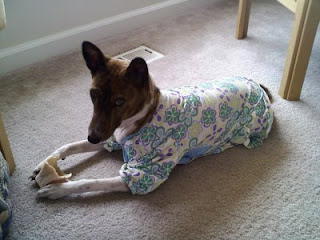 Cleo believes I'm playing an April Fool's trick on her.
But no, she's wearing a dress because she has an itchy skin condition and it keeps her from scratching. That's it for my April Fool's jokes and it's on the dog. Sorta.

Except for a phenomenon I've noticed in people who read only non-fiction. Some of them believe that all fiction is a trick. It's true. I've been, more than once, asked, "Yes, but what really happened? What don't you tell the truth? Why lie?"

Has this been anybody else's experience with non-fiction readers (and sometimes with people who don't read)?
Posted by Conda Douglas at 11:01 AM

Email ThisBlogThis!Share to TwitterShare to FacebookShare to Pinterest
Labels: Creativity, Dream On, Editing, Happiness, How to Focus and Succeed, Priorities, Writing

Non-fiction writers have to concern themselves with the facts. Have to prove their facts and sources. It's a different sort of writing. Some of it easy to read because it flows smoothly, some not.

Fiction is fun because we can see something factual and change the focus on it, highlight one part of it or another. We can take a 'fact' of science, history, politics, religion, life in general, and weave a story around it with fictional characters. The 'fact' can still remain true, just the story around it isn't, but does highlight the 'fact'. It's not a lie, it's called fiction. The stuff of movies and legends.

Fun to write too, Sia!

Conda, I had to laugh at the photo until I read that your pooch has a chronic itch. That can't be pleasant for poor Cleo. But it IS a good excuse to dress her in a variety of colorful loungewear, lol!

As far as "doubters," I think there are just some very negative, unimaginative people out there who don't really like to peer out of the hole of their own subjectivity. So they just become "nay-sayers" to almost everything, including creative works.

Thanks, Lynda. We're hoping to get rid of the itch--Cleo goes to a specialist soon! And yes, she gets dressed up in toddler dresses--we checked out "Doggie Wear" and it was expensive! 22 bucks for a sweater for a dog? This is much cheaper and more fun (for the humans).

And I believe you're right about the nay-sayers--it's work to use your imagination--and fun too!

Poor Cleo. Itchy skin AND she has to wear a human toddler dress. Keep her inside so other dogs won't point and laugh at her.

Why do people think fiction is based on a true story? Don't they realize writers have imaginations?

About those non-fiction only people. Don't they realize that a lot of fiction is based on fact?

Hope you have a great weekend!

Poor Cleo. Perhaps if you tell her she looks stunning?
I believe that fiction writers are seeking the truth, something deeper and more universal than we see most days while we're feeding our cats or dressing our dogs.
I've had scientists and doctors tell me they are too busy reading technical journals to fool around with something that's not true, not real. Oh, my, the insights they could gain by some time with the masters of fiction. I'm sure they'd be better scientists.

Well, Helen, her humans are too busy pointing and laughing to let poor Cleo outside! And I suspect that what some people fear is imagination.

Yes, Muse, and some of the worst offenders are those who "know" the facts--I'm thinking of family members here. I have a sibling who always says, "I don't remember it happening that way, why did you change it?" Because it's fiction.

Kathy, those scientists have forgotten that Leonard Da Vinci was a fantastic artist (in fact he was one of the first to autopsy a body and used his findings in his inventions AND art).

I admit that I read mostly nonfiction. But that's only because of time constraints. However, I do try to schedule in some fiction on a periodic basis. I find that fiction turns on the creative spotlight and allows me to see new and different ways of telling my story. Fiction and nonfiction are like like mom and dad. We need both to get the whole perspective.

Yes, Swu, good points. And it's one thing to read mostly non-fiction another to demand "The Truth". I always wonder, "What truth? Where? How can you really know?"

I also find that reading non-fiction is a delightful, fun source for my fiction...hmm, I see another post coming, thanks, Swu!

Ha! LOVE the dress! So cute. We could never get our cats into a dress. We can barely trim their toenails!

As for readers of nonfiction, I've had a few of them tell me snootily, "When I read, I want to *learn* something." First of all, there's plenty to be learned from books, even fiction. And, secondly, when they watch TV (which I admit I rarely do) I bet they watch to be entertained. Is that really so different?

And the people who need to "learn" when they read I suspect never read...

Now I believe you were really born to be a writer, and I'm glad you're using that gift.

Hi Conda
You've hit a topic of great interest to me. I've had four nonfiction books published to great success, but in more than ten years I haven't had any luck with fiction.

I'm told that there is a big difference between fiction and nonfiction, although most readers tell me my nonfiction reads like fiction. I haven't been able to discern the difference.

Although, I've never labored as hard over nonfiction as I have fiction. Nonfiction is easy. Perhaps it's my years as a journalist and the ability to dig deep for information, etc. Also, it's easy because the story is already told. You know when you start where the beginning is, and how it ends. The adventure is discovering the fascinating middle part that doesn't find its way in media reporting.

It is been my experience that people read nonfiction -- especially biographies or true crime -- to discover the mystical "X" factor that propels the central characters; both the good and the evil.

If anyone can give me a good difination of the difference between fiction and nonfictio -- other than one is true and the other isn't -- I'd be grateful.

Enjoy your blog Conda. Are your coming to San Antonio for D Maass' workshop?

PS had to go for Anonymous because I have trouble posting under my blogger name.

Thanks KIM for the lovely thought. When I click on your name a car company comes up? Is this correct?!

Hi Bob, great "seeing" you again. What's the link to your blog so I can visit?

And good points in your comment, too. About all I can add is that sometimes the fiction that becomes a bestseller a great deal of people believe is true. I'm thinking "Bridges of Madison County" here.

Wish I had time/money to go to San Antonio, Maass rocks!

Don't have a blog. I just lurk about reading all the talented folks like you.

That might be wisest, Bob. A blog is a great fun thing, but sometimes a great fun distraction from the main goal (in my case, finishing the first book of my trilogy).