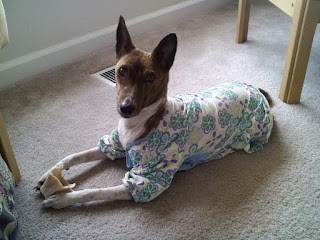 Cleo (wearing her dress)
December 2002-March 17, 2009
On St. Patrick's Day this year, I took Miss Cleo into the vet for her blood test. We were trying a new drug to help her with her autoimmune hepatitis. We don't know when she first developed this deadly disease. She was a rescue and perhaps always had it. But she'd been in remission for years and now the disease had returned. She wasn't ill, yet, this was a preemptive strike against the disease. The drug wasn't working and made her dehydrated and so they gave her fluids. Being a curious basenji, she always enjoyed the vets, always loved the activity. She was sitting up, watching the world, then laid down and stopped breathing.
She died.
This is the unexpected event.
First, I know all my wonderful readers will be sympathetic and empathetic and thank you. It's been a rough couple of weeks, but the family is recovering from the loss of this sweet dog.
Second, as all you creative people know, everything is used for our art. The last few days, I've been considering what many writing coaches call "The Unexpected Event." If used well, it's one of the most satisfying parts of a novel or short story or screenplay, etc. IF, that is. After this unexpected event, I realized some of what is needed to make it work.
The event must be improbable but not seemingly impossible or random. Although the vet was shocked and horrified that Cleo just...stopped breathing, she did have a serious, often fatal, disease. Although her disease seemed to be in remission, there was no knowing how much damage it had done, or even if it was in remission. Cleo was a basenji. All basenjis in the US are descended from 4 breeding pairs, so all basenjis suffer from inbreeding. Who knew what else was wrong? As the vet said over and over, "I didn't EXPECT Cleo to die today."
So the groundwork has to be laid carefully when writing the unexpected event--not too much or the reader will guess what's going to happen. Not too little or the reader will think "Where'd this come from? Ridiculous. Absurd." Having an unexpected event happen in my life has helped me sense where that balance of enough planted information or enough setup without forecasting the event.
Dear readers, have you had an unexpected event in your life that you can think of? Or several? Or many? How about in your writing?
Posted by Conda Douglas at 2:00 PM

Sorry to hear about this. My dog Dreyfus is getting up there in age, and I find myself dreading the day I have to let him go.

My unexpected event came last Thursday night when I got a voice mail letting me know not to come into work the next day because I no longer had a job. This marks two times in the past three years that I've unexpectedly lost my job.

I'm su sorry Conda. I know how important dogs are in peoples lives. especially writers, I think. We're not always so good with people.

I've had many unexpected events in my lifetime,Conda. I find them useful for my writing, but not necessarily at the time.

I can write about them only after some time has turned them from the unexpected into the processed. I cannot write well in a state of shock.


It was sad to hear about your beloved Cleo. She looks wonderful in her dress - expectant - as if she is about to ask a question: 'Did you call?'

Oh, and unexpected event? Came home one night and my boyfriend told me he was in love with his ex, and I had to move out. Completely out of the blue.

Interestingly enough, I had a first draft of a book about two women whose husbands leave them unexpectedly, so I was able to take all of that raw emotion and pour it into that book.

Of course now it's rough to read it!

Many, many commiserations, b efore I say that:-

The only such event that springs to mind was the death of my father. It shouldn't have been unexpected, seeing that he was well into his nineties! But it was. He was making out he was going on for ever. Not immediately, but a few years later it began to emerge in my art.

I’m sad to hear about your dog. It reminds me of the day my mother died. She had cancer and we were expecting a long, drawn-out and painful death. Then one day I got a call from some of her friends who had found her on the couch very poorly. Carrie and I went over and three days later she died of pneumonia. That was not expected. What did she ever do to get pneumonia? And then, of course, we have the mixed emotions that go with an event like that. We were sad to see her go but glad she didn’t suffer, and she really didn’t.

Sheesh, Nicklaus, your unexpected event is a downer, too. And twice in three years? Sucks.

Too true, Paul. I think it may be because dogs are better at being alive.

Horrible experience. My heart goes out to you.

I love the idea of an unexpected event, and I think it works well in fiction.

I can't think of any examples right now, but I will certainly keep an eye out and endeavor to include a few in my own stories.

Elisabeth--shock is the reason I didn't even blog about this unexpected event until two weeks later.

And thank you about Cleo and you're right, she is thinking "Is somebody calling me? Is there food involved?"

Beth, thank you--and I have a friend who returned home to the same situation--only the ex-now-again lover was a man!

Dave, I'm not surprised that it took a while for your father's death to appear in your art, but that it did appear is also no surprise.

We use it all.

Jim, thank you for that--a friend pointed out that because the drugs weren't working my little dog could have had a long death. I think sometimes we...let go.

Carol--too true--but at least a little useful--and not all unexpected events need to be bad!

Swu--glad it was something new for you!

I'm so sorry to hear about Cleo. It sounds as though you were lucky to have her and her to have you. And rescue dogs are such great dogs!

First: I'm so sorry to hear about your dog. The fact that it was unexpected makes it, in many ways, much more terrible.

As for the unexpected event in writing, I was just discussing this with some of my students. We were talking about deus ex machinas, and how they were considered appropriate in Ancient Greek literature, but are often considered weak writing today. We came to the same conclusion you did: as long as there's proper foreshadow, the unexpected event can be a great literary device.