It's that time--resolutions that work 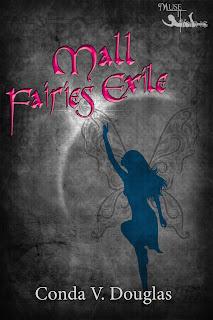 The cover of my upcoming novel release on February 24th.
Yes, yes, it's that awful time of year, resolution time, ugh. But, it doesn't have to be painful and we don't have to fail. With three general tools success will be the key word for 2012.
First tool: PRIORITIZE. Instead of trying to: lose weight, stop smoking, exercise, eat only fresh food cooked yourself, write five new novels, learn Spanish and French, grow three inches taller even though you're 55 years old and ... well, you get the idea ... instead ask "What's most important to me to accomplish in 2012?" Focus on that one thing. That's why I have the cover of my upcoming novel as an illustration. My most important priority is to write the second in this trilogy: THE MALL FAIRIES: WAR.
Second tool: ORGANIZE. My mom called this "clearing the decks." There are a lot of ways to stumble and fall off the ship if your deck isn't clear. While organizing, refer often to your #1 priority and set up systems that will support that priority. For example, I like to work to self-imposed deadlines, so a calendar with those deadlines noted helps. Which brings me to the final suggestion ...
Third and perhaps most important tool: BREAK IT UP. Trying to do everything all at once is an automatic failure. Imagining writing 300+ pages for the new w.i.p. makes it seem an impossible task. Break up your first priority into manageable pieces. For myself, I can't write an entire novel in a month, I've done NaNoWriMo and never turned out 50,000 words total. BUT, I can often do 1000 words a day, or one scene a day. So I compute how long it will take (and give myself a little wriggle room) and impose my deadlines accordingly.
I hope this helps with everyone's resolutions. Readers, any suggestions? Any stories of what has worked for you?
AND HAPPY NEW YEAR!
SEE YOU IN 2012!
Posted by Conda Douglas at 7:45 AM

Congratulations on your upcoming book!
I try not to set so many goals that I overwhelm myself and accomplish nothing.
Happy New Year!

Some sound advice, Conda! And I also can't write a novel in a month. My thinker just doesn't work that way. Sometimes I actually need to give myself a little space to find my story. When I do, I'm always happy with the end result. So if I were to add anything to your wonderful list it might be: to give yourself a break some days. Happy New Year, Conda!

Thanks for sharing your post. We are all looking for ways to accomplish our goals for 2012. Blessings, Deborah H. Bateman

Thank you Alex! And I think creative people always can imagine doing many different things and therefore it's so easy to set too many goals. Better to have a few important ones.

Diana--very useful advice. We all need days where we rest up. And so many writers (myself included) sometimes forget that. Maybe I'll take tomorrow off! It is New Years!

Congratulations on your novel.

Good advice. Write, write, write. I can't get to a thousand words a day. Sometimes I don't even write for several days. But I read advice like yours and I try.

Nice site, and a nice image of you.

Life Line, welcome to my blog and Happy 2012 to you also.

Swu, dear friend, always so good to hear from you and thank you! AND, all we can do is try our best, as my wise old mom always said. And she always added, "There's no failure, as long as you've tried."

Congratulations and good luck on the release.

Woohoo...you go girl. I've got a feelin' this is gonna be goooood!!!

God bless ya and have a wonderful day!!! :o)

Nezzy, girlfriends, thanks so much!