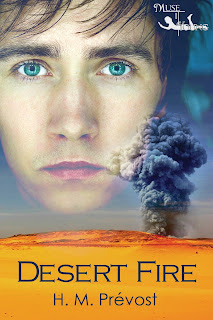 Let's give a big welcome to my guest blogger today, H. M. Prevost, author of Desert Fire. I've read Desert Fire and it's a rip roarer of a read, so I'm very pleased to have the author and her words here today. Without further ado then here's a bit about Desert Fire an and excerpt ...

Nick stared at the mini-CD. It gleamed under the streetlights. Only the dying American pilot could have slipped it into his pocket. . . .
After running to the scene of a plane crash in Abu Dhabi, Nick Chevalier stumbles across classified military secrets. A ruthless terrorist will stop at nothing to get them. As Nick investigates the cover-up behind the downed plane, he crosses paths with an agent from a covert espionage agency and makes the leap from high school senior to teen spy. But he realizes too late that he put more than his own life at risk—his mother and sister are also in danger. Does he have what it takes to outwit a terrorist who wants him dead and save the two people he loves?

Here is an interview with Faris Al Muhairbi, one of the main characters in Desert Fire. The adventure begins in Abu Dhabi, the capital of the United Arab Emirates (if you don’t know where that is, well, it’s 2 hours away from Dubai!). Nick (the main character and teen super spy)  is accompanied by his new friend, Faris Al Muhairbi, on his adventures. Faris lives in Abu Dhabi and is an entitled 17-year-old from a very wealthy Emirati family.
Q: How did you meet Nick?
My brother Mohammed and I were in our father’s Hummer, just driving around, and we saw this plane that was on fire. It looked like it was going to crash in the desert. We were headed towards it, and we saw Nick on the sidewalk, so we stopped to pick him up.
Q: How did things go from there?
We got to the desert where the plane crashed and we found the pilot. He died right in front of us. But he gave Nick a CD with all this classified information on it. Then we heard sirens, so we took off. When we found out what was on the CD, whoa, we knew we were in the middle of something big! The next thing I knew, we were on the hunt for a terrorist, and he was hunting us too!
Q: Tell us a bit about your country.
The UAE is rich. I mean rich because we export tons of oil. My family has five cars—Hummer, Lexus, Mercedes, and two BMWs. And we live in this huge villa that’s more like a hotel than a house. We even have an elevator so our Filipina maids, all four of them, can bring us our trays of food without climbing all the stairs. I’ve never had to make my bed in my life! Nick thinks I’m spoiled, but I really don’t get why.
Dubai is a beautiful city, and the architecture is amazing. We have spectacular landmarks, like Burj Al Arab, the world’s only 7-star hotel. Nick and I go to a meeting there, and it turns out to be a disaster. The terrorist identifies Nick and tries to kill him. It’s a miracle that we managed to get away.
Q: How well do you get along with Nick after all this? Are you still friends?
We’re like brothers after all we’ve been through. If you want to read about more of our adventures, the sequel to Desert Fire will be coming out in December, and it’s called Shadow Army. 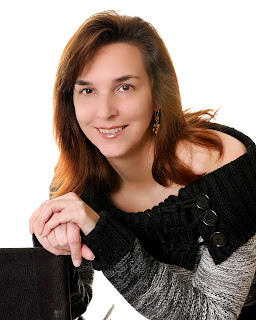 H.M. Prévost is a writer, photographer, teacher and avid reader of YA fiction. Thrillers, fantasy and paranormal romances (that’s right, pretty much anything with a vampire in it!) are her favorite genres. She also loves to paint and has covered her house with murals. For many years, she worked abroad in the United Arab Emirates, which provided an exotic setting for her debut YA thriller, Desert Fire. She lives in Québec with her husband, two rambunctious daughters, and Ginger the cat.

Conda here again, I'm sure our guest writer would love to answer questions. I'll start with one--what inspired this series? Was it just your travels, or?
Posted by Conda Douglas at 6:08 AM