New recipe and story to celebrate Fandemonium and the FREE re-release of my cookbook! 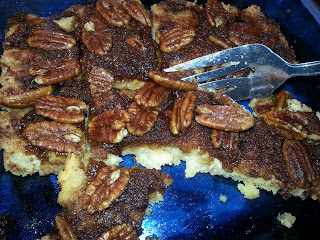 Fast and easy and oh, so yummy Cinnamon Slumpy!

This Friday, August 2nd, I'll be teaching a workshop at Fandemonium on When to Quit. In honor of that, I've added recipes to my The Mall Fairies Sweet Tooth Cookbook and it will be FREE on Amazon starting July 31st through August 4th. Here's one of the new recipes and its story. Enjoy!

CINNAMON SLUMPY TO THE RESCUE!

Uh-oh, Grandma MacDougall thought as she looked at the clock. She'd overslept this Sunday morning. It was almost eleven. While the store didn't open until noon on Sundays, this Sunday she'd needed to be up early, or at least early enough to make a big breakfast.
Grandma listened as she threw on her robe and headed the few feet to her tiny kitchen. Sweet silence made her sigh. Not a peep from Grace's loft, where her granddaughter and her granddaughter's best friend Jody slept. Thank heavens teenagers slept heavy and long, hopefully long enough for Grandma to make her promised payment to them both. If they helped with the Christmas Fairyland store's annual inventory then they'd get one great homemade-by-great-cook-Grandma-MacDougall breakfast, a dinner of their choice at the Food Court and movie tickets. Okay pay for a couple of hours work in the tiny store—okay, they worked cheap.
Now for the first part of their pay—breakfast. Grandma cast about her closet-sized kitchen for what to make and what she could make quickly that would still be fabulous. She stopped at the flour canister with the illustration of a Santa holding a small Christmas tree in such a way it appeared the top of the tree went up his nose. Should she make pancakes? Nope, too long to get the old creaky griddle hot. Biscuits with sausage gravy? No sausage. No time to make the biscuits.
From Grace's loft came a sleep voice, "Mrs. MacDougall, is breakfast ready yet?" Jody was awake, Grace would soon follow.
Time's up. "Just a few minutes," Grandma called back. She wondered if she could pass cereal off as…nope, no way. Then she spotted the extra large canister of cinnamon, the one illustrasted with a crossed-eyed orange reindeer. She slumped in relief.
Fast, easy and delicious, Cinnamon Slumpy would save the day!

This recipe is for those who love bizarre textures. I never know when this “Slumpy” is done, hence the name. It doesn’t matter, it’s delicious, whether still runny in parts, or all fluffy, crusty cake. This cake is really fast to make. And it makes a lot, so halve the recipe if it’s for fewer than four to six people if you’re out of room in your freezer. This Slumpy is great for a throw together brunch with some fresh fruit and/or yogurt on the side.

1 cup unbleached flour (add a half cup for a more sponge-like cake and less slump)
½ cup of sugar (may be halved for a more cake-like dish, or omitted, the sweetness comes from the brown sugar topping, I usually omit the sugar)
¾ cup of soy or other “milk”
1 to 2 teaspoons baking powder (I use two for fluff amongst the goo, or when I add the flour and bake it longer it’s a sponge cake.)
1 egg or egg substitute
1 to 2 teaspoons vanilla or ¼ teaspoon lemon extract (for a lemony cinnamon cake)

½ cup brown sugar or more
1-2 teaspoon cinnamon or more
¼ to ½ cup margarine, butter, or coconut oil melted (or even more, discover what you like)

Mix the flour, sugar, milk and egg together and pour into an 8 or 9 inch round or square cake pan. Spread lots of brown sugar and cinnamon over the top. Add a cup of chopped nuts and/or apples, dried or frozen blueberries or cherries, raisins or cranberries on top. If you use the dried fruits, soak them a little in the margarine, so they don’t burn on top of the Slump. Or anything else you’d like on top of a cake. Be imaginative! Drizzle the butter/margarine/coconut oil over the top. Try to get it a little even, more or less. Bake for 20-25 minutes in 350 degrees, for gooey Slump, around 35 minutes for spongy Slump.

Oh, my. This looks DELICIOUS!

Thanks Caryn, it really is delicious. Oh, and did I mention the cookbook is FREE through August 4th? Here's the link again:
FREE: The Mall Fairies Sweet Tooth Cookbook, with fun short stories from the Mall Fairies series, plus sweet recipes. FREE on kindle through Sunday, August 4th. Enjoy! http://www.amazon.com/Fairies-Sweet-Tooth-Cookbook-ebook/dp/B00BF6KQF2/ref=sr_1_1?ie=UTF8&qid=1375392120&sr=8-1&keywords=The+mall+fairies+sweet+tooth+cookbook