Organization for Writers and other creative folks 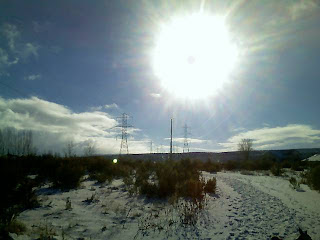 Sun after a snowy day, welcome but blinding...
Jim's post about a writer's space led me to this entry. Also, it's that time of the year. Not just the time of the year when the jeans don't fit and we're all broke and there's only sun once in a while, but the time when many people want/need to get organized.

3. You may never find anything again.
2. You may spend the rest of your life organizing.
and the most important reason:
1. It may impact in a negative way your creativity.

So, are you organized to the nth degree? Or your workspace is condemned as a health hazard? Or somewhere in between? Does your work space help or hinder your creative endeavors? Or?

Email ThisBlogThis!Share to TwitterShare to FacebookShare to Pinterest
Labels: Creativity, Happiness, How to Focus and Succeed, Writing

Of course I'm organized: I can reach into the pile and pull out whatever it is I'm looking for!

Organization is nothing more than efficient storage & retrieval of whatever it is. Creativity, even if it comes from the Creator, is chaotic — you can't expect creativity to come in neat rows & columns. If what you do requires that kind of "organization," then I would suspect that what you're doing isn't creative. :-)

Good points, Far. And you're amazing--I can never even find the pile...when I don't work at the organization. And sometimes I get too creative with my organization. Almost sounds like an oxymoron doesn't it?

Since I've posted a photo of my desk for the all the world to see there's no way I can pretend to be an untidy individual. Tidy does not always mean organised though. The reason I'm tidy now is because, after a great many years, I now have my own office and that has given me space to expand into. It is of course only a matter of time before I start to run out of shelf space and I've already had to shove a pile of books into archive boxes (there are now three under my desk). I wasn't always like this. In my teens I used to cover ever bit of furniture with my ongoing projects but I always knew where everything was; the familiar term 'organised chaos' obviously comes to mind.

The romantic notion of the writer's room as a kind of literary bomb site must be starting to fall by the wayside as more and more of us rely on computers to store our data, something I have mixed feelings about I have to say. The simple fact though is that my memory is not what it once was and I have to compensate for that. Cocooning myself in logic and order helps.

Nice try, but it doesn't work with me! The reverse of the coin that Jim was spinning is that untidy doesn't have to mean disorganized. I am definitely the first, but would deny that I am the second. Tidying my desk was always fatal, so far as organization was concerned. Tidy up all the scraps of paper on which my drafts and notes are written and it just doesn't work any more. Looks nicer, tastes horrible!

Ha, ha! I've had organizing times when my efforts left me completely in the dark. Years later, I find what I had organized into oblivion. Actually, that's fun in a way, it's kind of like Christmas and getting a new toy.

Talking about "head traffic", organizing those thoughts, those many, many thoughts, into some semblance of organization that makes sense to yourself and, most importantly, your audience require so much effort. I've had periods of, for lack of a better phrase, "brain farts" that leave my "head traffic" scurrying into a train wreck.

To answer your question, I'm somewhere in between with my workspace. I think it helps with my endeavors, to a point. For instance, why should I reach above my head for a reference book when I can keep it on my desk beside me? Why should I put the pencil back in the cuddy when I may need it in the next minute? My biggest downfall, where workspace clutter is concerned, the letter/bill holder. Why can't I just file those things right away?

Yeah, Dave, there's a big difference between "tidy" and "organized". I've been incredibly tidy (when people visit and stay at the house, for example, or we have a large party)and haven't been able to find anything ever again.

And muse, BRAIN FARTS? I love it. What a great description. And somehow I manage to "misplace" bills sometimes...