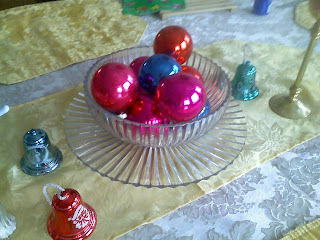 The last of the Christmas photos.
It's beginning to feel a lot like time to take down the Christmas decorations. It may seem early for some, but this all part of embracing change. That can be the glory of the season: Christmas and the holiday season is so dramatic, so extreme, followed by January. Big change.

Many people fight that change. Somehow, if only Christmas went on forever...so they put up lights in September and don't take the lights down until Valentine's Day. This is one way of attempting to stop change.

Another is rigidly insisting on traditions. I know someone who, when she moved into a new house, took photos the first Christmas season so that everything could be placed in exactly the same way the next year, and the next, and the next.

It's as if though people believe that re-creating the situation will re-create the experience. This isn't possible. Christmas last year was different than this year and it will be different next year. Change is inevitable.

And not only accepting but embracing that simple fact releases enormous amounts of stress. In fact, it makes it impossible to "ruin Christmas," because it's only that year's Christmas. So what if the lamb roast is still frozen and takes forever to cook? So what if the Christmas gifts don't arrive in time? Or somebody's ill and doesn't come to dinner? That's the experience of that particular Christmas.

And that's just with the Christmas season--think of the plethora of ideas that would flood forth if we just remember--it's always changing and always will. Perhaps that's the only constant.
Posted by Conda Douglas at 8:26 AM

Email ThisBlogThis!Share to TwitterShare to FacebookShare to Pinterest
Labels: Creativity, Happiness, How to Focus and Succeed, Priorities, Writing

On the subject of creativity and novelty, I think these are intrinsically bound together. Every creative experience is new. This is why I think it is questionable to try and replicate the conditions that have inspired us in the past. I've read about writers who can't put pen to paper unless they have their blue blankie wrapped around their legs but I've never been one for that. It's like saying you can't have Christmas without a tree. What about the Christmas spirit? Or the writer's state of mind?

I'll be honest, I don't want to keep writing the same ol' things in the same ol' way year in and year out; I enjoy the challenge of new forms. It's why I'm struggling so much with this current novel but it is different from what I've done before. I can't fall back on the solutions to old problems to solve my new ones. I know I will because I always have. It'll be different but that's what I'm looking for, something that's the same but different, novel but not too novel.

Jim, your comment reminded me of a serious problem for writers of series--they often become tired of the same characters, the same style, of the series. But the readers don't and insist on a repeat of the previous experience, just with a different plot.

And I'm with you, Jim, I enjoy the challenge of new forms. My new one is a trilogy. I'm struggling with each novel needs to be a stand alone with its own story arc, then the trilogy needs to have a complete and satisfying story arc. I love the stretching.